Activate. Restore. Know. A fun platform to transform our societies for good.

ARK is short for Activate body & mind, Restore the environment, Know your bioregion. The ARK is a gamified social network which uses a highly scalable technology and a sustainable social business model to exponentially accelerate bottom-up climate change adaptation measures. It offers a clearly structured step-by-step learning journey to users in local communities; and a global collaborative library of best practices to facilitators. The ARK uses the power of technology to drive long term behavioral change in offline communities.

Continue to read here or download the full white paper from researchgate.

Automation through robots and algorithms will make human labor in the course of the next few years largely obsolete. People will nevertheless need both an occupation and an income to live in dignity. A new social contract is required but spreading nationalism and decreasing wealth distribution makes the implementation increasingly unlikely. One thing is sure: jobs disappear faster than national politicians will find a consensus on a solution. It is therefore the civil society and individual self-responsibility which has to push for a solution to the problem; and the solution must be radical.

Blockchain technology has set out to solve the problem of power concentration in centralized national banks by e.g. establishing with Bitcoin a digital currency which is secure and potentially decentralized. Bitcoin has nevertheless not solved the problem of scarcity, but in effect established a new scarcity system which operates along the same lines as fiat currencies: it is only a small tech savvy elite that is able to gross huge profits, while the masses have been left out. Bitcoin has moreover developed into an environmental threat as its operation, in particular its incremental proof of work (PoW), consumes huge amounts of energy.

The universal basic income (UBI) on the other hand, has been conceived as an unconditional income which resolves decreasing wealth distribution. However, it creates in societies similar to bitcoin and other cryptocurrencies a state of anomie. Anomie is best understood as insufficient normative regulation and leads to an alienation from common goals and values. Individuals lose sight of their shared interests based on mutual dependence. In this condition, they are less constrained by group norms. Normative values become generalized, rather than personally embraced.

On a planet with a population of eight to ten billion a universal basic income needs to encourage sustainable behavior in the social, environmental and economic realm. We need incentives to collaborate on a global scale and these incentives need to align global goals with things that matter to our individual lives. Ethical questions about how to structure such a conditional universal basic income therefore take center stage.

Should somebody who disposes of used batteries in a pristine lake or spills cooking oil into the kitchen sink receive the same basic income as a person that collects used batteries and cooking oil and brings them to a recycling center? Should somebody who consumes enormous amounts of energy to mine for cryptocurrencies pay for electricity the same price as an average household? Such ethical questions need to be addressed in a global economic framework for which nation state governments are too slow to find an agreement on.

We need an economic system that encourages us to do the right things; we need a conditional basic income embedded in a sustainable universal currency, which is based on a PoW that does not encourage meaningless calculations performed by algorithms but a PoW which is connected to our own impact on self, others and planet.

We need a conditional universal basic income that is subject to continuous learning (eradicating ignorance) and proper behavior (reducing negative social and environmental impact). We need an economic system which motivates humanity to focus on contribution to the system at large (globalism) instead of system fragments (nationalism, corporatism, family mindedness, egoism).

We moreover need a currency which can be attained by creative collaboration instead of destructive competition. It is this transition which poses probably the biggest problem, because competition has been ingrained to such a depth into our cultures and is brought to a new high through accelerating technology and 20th  century industrial economics rejuvenated by 21st century China. 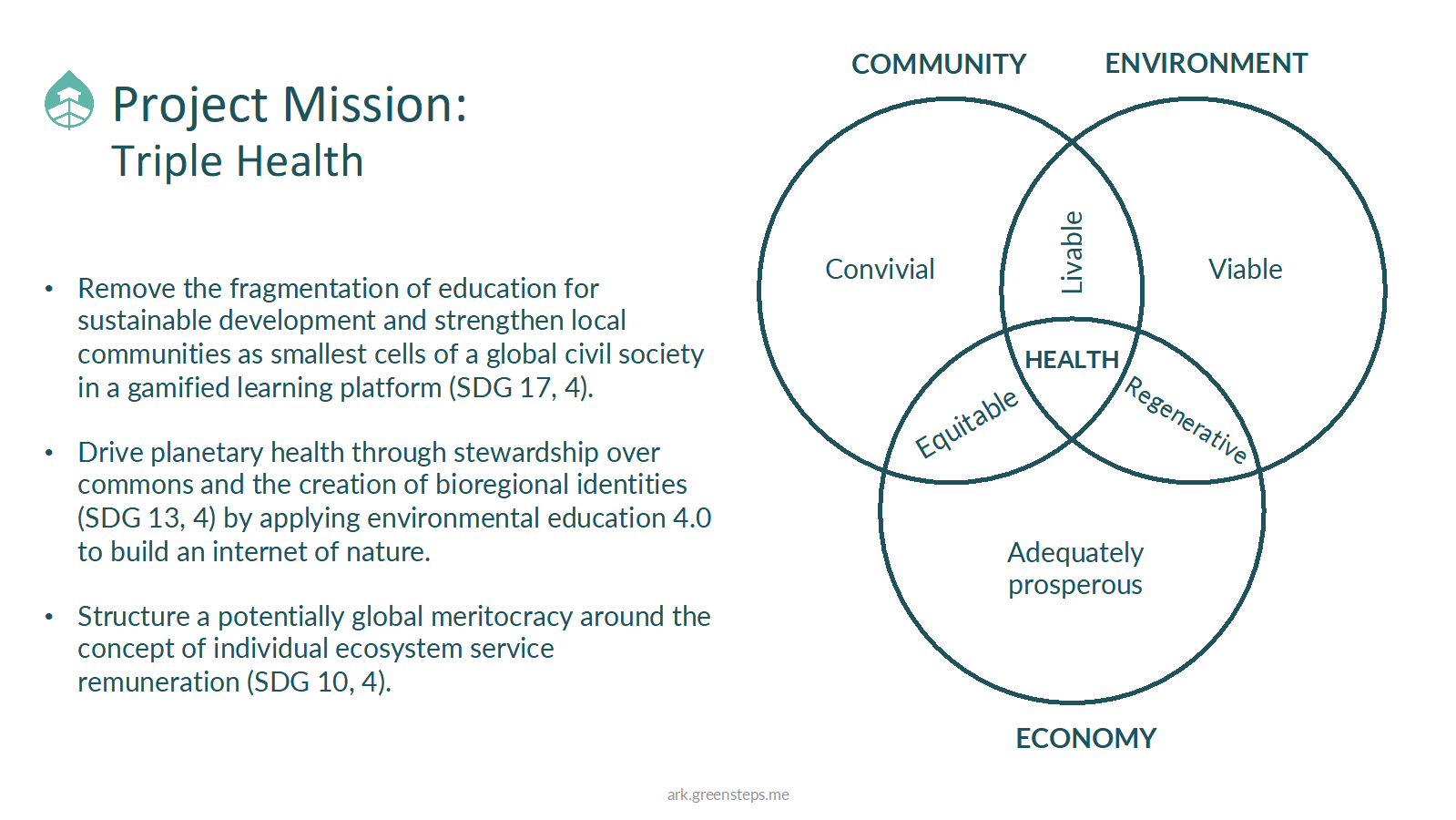 The ARK establishes a blockchain based currency which does not store profit made but is rewarded for social and environmental value created. The ARK empowers a paradigm shift from HAVING to BEING, from investing into a currency as a storage of profit extracted to being rewarded for meaningfully investment in self, others and planet.

In an environment which requires us to transform our habits of consumption, learning how to adapt and learning how to live sustainably, turns into the work required from each one of us. Our contribution in form of individual ecosystem services are Proof of Work. Our interdependence with a commons and/or a community are Proof of Stake (PoS).

The greatest risk is that we could face a “perfect storm” – a situation where technological unemployment and environmental impact unfold roughly in parallel, reinforcing and perhaps even amplifying each other. If, however, we can fully leverage advancing technology as a solution – while recognizing and adapting to its implications for employment and the distribution of income – then the outcome is likely to be far more optimistic. Negotiating a path through these entangled forces and crafting a future that offers broad-based security and prosperity may prove to be the greatest challenge for our time. Understanding education as a public good which must not be influenced by competitive profit or power maximation is key to finding that path.

The ARK establishes a social currency with the mission of changing mankind’s value system from competition to cooperation, from scarcity to abundance, from greed to empathy, from profit extracted from people & planet to value added to people & planet.

Rules of the Game

ARK WHITE PAPER
The ARK makes use of cookies to give you the option to log in and remember your preferences. By clicking Accept All, you consent to the use of cookies.
Cookie SettingsAccept All
Manage consent

This website uses cookies to improve your experience while you navigate through the website. Out of these, the cookies that are categorized as necessary are stored on your browser as they are essential for the working of basic functionalities of the website. We also use third-party cookies that help us analyze and understand how you use this website. These cookies will be stored in your browser only with your consent. You also have the option to opt-out of these cookies. But opting out of some of these cookies may affect your browsing experience.
Necessary Always Enabled